it’s official! We are offering our first in-person OFM workshop this month, organized by LIBRE hub and sponsored by Chang Zuckerberg Initiative. For this workshop, we will build the motorized low-cost OFM v6 using Arduino nano and ULN2003 drivers.

As part of our commitment to promote open hardware adoption in research and education, participants will be able to take their OFM back to their institutions and use them in their activities.

If you know anyone who might be interested in participating, please send them the following link: Workshop OpenFlexure Microscope Application Form

I’ll post our updates from the workshop in this thread 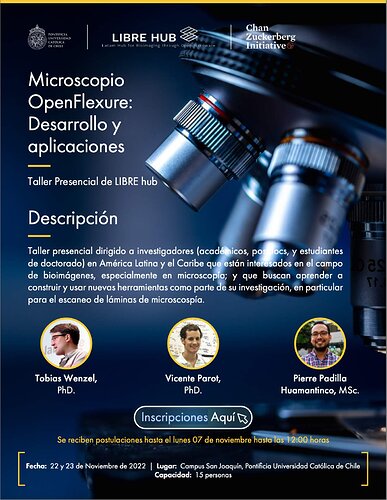 Very cool! This relates to the discussion in our most recent design review - is it easier for you to get hold of an Arduino Nano, or a Raspberry Pi Pico? I would expect the answer is the Arduino, but chip availability for RP2040 is actually better than for the ATMEGA in the Nano… It’s also worth asking if you can get hold of pico boards at all, and if so whether it’s prohibitively slow/expensive compared to the Nano?

I ask because the latest revision of the Sangaboard is based on the microcontroller chip in the Pi Pico, and so it might be sensible to move from recommending the Nano + motor boards to recommending a Pico + motor boards. I should be clear that, at the moment, both should work for the forseeable future, and I’ve not yet tested or documented the Pico version.

Hi @r.w.bowman! Yes, it’s easier and cheaper to get an Arduino Nano than a Raspberry Pi Pico. Just an example of these Chilean suppliers:

You could get the Pi Pico cheaper in MercadoLibre, but not sure if they are original. Another consideration was documentation. We want to recommend a version that documentation is available and has been tested.

As Technology Fellow from the LIBRE hub, I hope to explore these different options and validate feasibility at the local and regional levels.

Thanks - obviously documentation is an issue we can, and probably will, solve! The other points are really useful though. I guess it will take a long time for RP2040 boards to be as widespread as the Nano clones - though it may be that knock-off Pico boards are a perfectly good substitute for the genuine article if it’s not available. I have not seen any unofficial Picos though; in the UK the genuine ones are so cheap, there’s not much point!

I thought I’d also mention that, thanks to feedback from ReGOSH, I’ve reinstated the C270 optics module, so that should be in the next v7 beta.

Most of your other LIBRE events look to be through Zoom. Where will this link be posted?
@biodotpe

Hi @Eaoke3, the next workshop will be in-person, so we won’t have a Zoom session. However, some future workshops will be in virtual mode. We will share pictures and other resources in this thread next week.

The OFM kits are almost ready! I will start another thread related to the workshop but in Spanish. Due to the workshop will be offered mainly in Spanish and we would like participants to get familiar with the Forum, so the following post for participants’ presentation would be in the same language.

To clarify, the documentation of this event will be in Spanish and English and eventually in Portuguese.

I am looking forward to your comments! 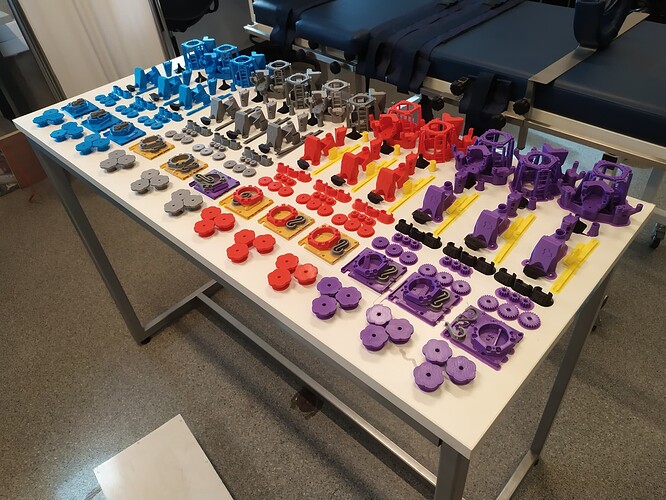 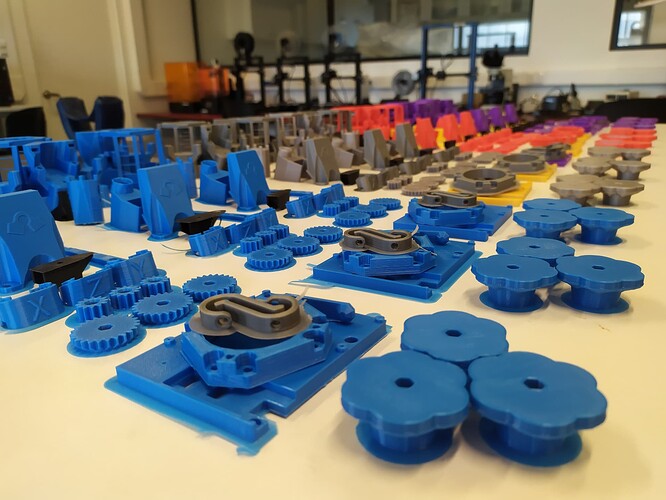 Well done @biodotpe! Thanks to you and the rest of the LIBRE hub team, we are very excited and pretty much ready to go for a great workshop this week. Latin America - get ready for research grade open source hardware in #bioimaging

@biodotpe I have been looking at your lovely array of parts, and I have a couple of questions.

I don’t recognise the black part between the illumination dovetail and the feet in the pictures, what is it? Are you using the nano_convertor_plate from V7 as a holder for the controllers for a motorised version? - I see you have both manual and motorised options for the actuator parts.

All the best for your workshop.

Hi @WilliamW, the black part is the back foot for OFM v6. We have not included a microscope base this time. Yes, we included the thumbwheel if users want to use the manual option instead of the motorized version, which we will build in this workshop.