I’m looking to modify my setup a little and use a usb webcam rather than the camera port and was wondering if anyone ever ended up making a lens spacer / camera platform that worked well with either the Logitech C270 or Arducam?

I tried out the Logitech stl openflexure already provides and it works/looks great, but I unfortunately need the lower magnification of the normal pi optics. I’m trying to adapt the regular lens spacer to fit the arducam I linked above, but I’m pretty much a novice at 3D modeling so I was wondering if anyone had already developed a good spacer/platform.

I tried searching the forums but couldn’t find anything. Cheers.

We have not looked at the C270 optics recently, it is not on our core development path. Reducing the magnification means reducing the distance between the lens and the camera. Looking at the STL, for the V6.1.5 C270 optics, the camera is quite large and would interfere with the dovetail of the z-mount if it was higher up in the microscope. 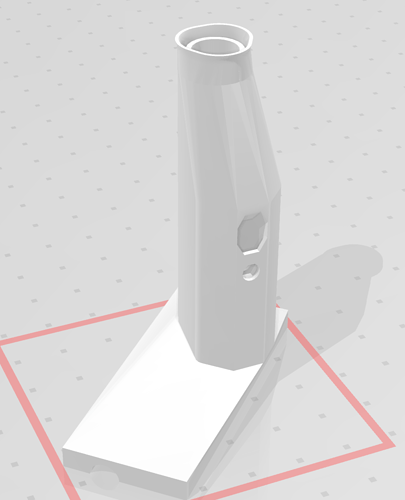 Unless it could go so high up that it misses the top of the dovetail in a similar way to the Raspberry Pi camera. A test version of improved instructions at https://build.openflexure.org/openflexure-microscope/for-gitbuilding-v0.11/low_cost_microscope/mount_optics_and_microscope.html shows the render of the Pi camera basic optics in place. Putting the C270 up there might give an issue with space between the stage legs - it might only work on the upright version of eth microscope - with the camera above the stage.

@quigly you also mention the Arducam USB, which is basically just the same sensor as the PiCamera V2 with a different interface. It would probably be easier to integrate into the Openflexure microscope V7 than the C270 at a more sensible magnification. The board looks a little bigger than the standard PiCamera, but it should be possible to make a mount to fit I think. If you have a raspberry PI, then using the picamera in the camera port helps with being able to set the colour correction and to use the integrations of the web app for automatic scanning etc.

I gather from this forum that most people using the C270 are using it directly into a computer, to avoid the additional expense of the Pi, and also the availability of a Pi. If that is that case, what is the availability and cost of the Arducam B0196 compared to the Logitech C270 in other places? Both are available and the Arducam is slightly cheaper than the C270 from my usual maker/electronics suppliers in the UK, but that is probably not the same elsewhere.

I’ve used the C270 in the 6 version with a 40X objective and directly to a computer (VLC or Cheese) and works great.
We did some experiments with M12 lens too a
Have not tried on the 7 version
C270 is cheap and easy to find in Argentina so it is a good option for educational/recreational use

This is a stupid question, but where are the instructions for opening up the C270 webcam and attaching the microscope modules? I am sure that I have seen them, but I cannot now work out where they are!

I found this: https://cdata.oho.wiki/images/d/dd/Of_mico_penflexure-microscope.pdf
It shows adn explains what to do and matches what looked to be needed from taking the webcam apart. The lens module seems pretty firmly attached, even with the screws removed from the back.

I am waking up this discussion as I have made some progress on Openflexure basic optics modules for the Logitech C270 and Arducam B0196 USB cameras Draft: Lens spacers for C270 and Arducam B0196 (!309) · Merge requests · OpenFlexure / openflexure-microscope · GitLab. I think the Arducam B0196 module will work well with some more tweaks to the design and removing the outer skirt from the PCB.

The C270 camera board is very long, so it has to poke out between the legs of the xy stage (unless it is all the way at the base, as with the old V6.1.5 one which gives an unreasonable magnification). This has two issues. The width of the board between the legs restricts the stage motion, I am not exactly sure what the travel will be, less than 10mm total I think. Also the camera has to be rotated 45 degrees compared to the standard. This means that manual movement using a single xy actuator will move the sample diagonally across the field of view. This can of course be managed for a motorised version, but USB versions I expect are mostly manual.

So, a couple of questions for people using USB camera versions of the Openflexure microscope: is it still worth having a C270 low cost optics version with these limitations? The high resolution C270 optics are not affected by these issues and will be retained as options.
Are there other USB cameras that are widely available that people would like to use instead? It would need an easily removeable lens that can be re-used as the objective, and a longest board dimension less than 32mm to fit easily.

So first off my apologies for going dark, I could have sworn I responded to the earlier messages but must have never hit send.

I think I lack a lot of technical expertise/vocabulary to say exactly what I’m looking for so a picture might help, I’ve attached my setup which is essentially four scopes (as many as I can fit) crammed into a cell culture incubator. 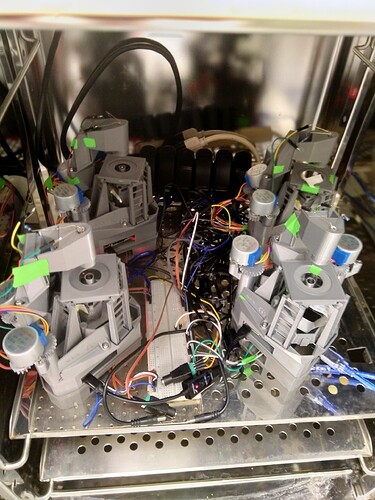 I image mammalian cells infected with yeast with these and don’t need particularly powerful magnification or a robust image acquisition platform to be able to see the things I’m interested in. As of now I use the default pi optics and they’re amazing. When I tested the C270 I think I just used the default webcam app and it looked great, just a smaller field of view than I’d like.

My idea was that using USB webcams I could run four scopes off of one pi since these scopes are always right next to each other and never move and all I’m doing is flicking on an LED and calling a webcam snapshot via python every minute or so, and that way I could 1. cut down on costs and 2. free up some of my pis for more scopes since they’re still constantly out of stock everywhere.

So basically I’m not married to the C270 and would be interested in any USB webcam as long as the field of view ends up large enough to get a good amount of cells at a high enough magnification (similar to the default raspberry pi optics would be perfect).

Also in case anyone is wondering for their own applications, I’ve had these things in the humid and warm (37 C) incubators for like 2 years now and they’re doing fine. The PLA gets very brittle so it’s easy to accidentally snap the stage if you’re not careful while doing repairs, and it’s almost hilarious how warped the feet get as the nitrile bands pull at them but the only actual issue I’ve had is occasionally moisture will get trapped underneath the lens in the optics spacer which ruins the image but all you have to do is take the scope out of the incubator and run a lens wipe over those bits to dry them out.

That is really useful. Are you using autofocus for each picture, or is it all stable enough at that magnification? Autofocus as it is designed now is rather wedded to the Pi and Pi Camera. Making the main software work to get the colour correction and autofocus with a USB camera is a longer term goal.

I now have a version of C270 lens spacer that does fit in the standard inverted microscope. I have then measured the travel, which is only 6mm (3mm each way) in one direction, and is the full travel of the stage in the other direction. Is that a useful amount of travel?
Mounted on an upright version of the V7 there would be no travel restriction.

The stability is good, I’m not using autofocus for each picture. Or at least I don’t think I am, I’m using the openflexure_microscope_client python package and I only call capture_image() not autofocus(). My test run with the C270 went well in terms of focus, exposure, etc. If I recall correctly, the main issue was the small field of view. The default optics has a field of view that can capture like 70-120 macrophages depending on how densely they’re seeded and I’m looking for a rare phenotype so the more cells in frame the better.

I think the 6 mm of travel would be fine, if I’m understanding correctly that just means the z axis/camera platform would have 6 mm of movement for focusing? I should probably test it out to make sure but I have to refocus very little when switching out samples so I would think it’d be fine.

I think the 6 mm of travel would be fine, if I’m understanding correctly that just means the z axis/camera platform would have 6 mm of movement for focusing? I should probably test it out to make sure but I have to refocus very little when switching out samples so I would think it’d be fine.

With the upright version of the microscope there would be full x-y travel. My feeling would be that the upright would be more affected by the material problems in an incubator as it has a big part with overhang that can sag.

Ahh my bad, yeah I think that would still be fine I don’t need too much movement to find good fields of view. I do have to stay with the inverted scope though, because it’s live cell imaging I use dishes with coverslips embedded in the bottom and the dish itself needs to be filled with cell media the whole time so to get a clear image it can only be from the bottom.