Has anyone given a thought on using compute models so that two microscope with different objectives can be made to work with the Dual MIPI camera connectors of the Compute model board.
This will be helpful in routine pathology work as the slides need to be observed at multiple resolution simultaneously/sequentially.(Reduces the manual changing and adjustment of the optics module which is cumbersome and time consuming)
One may also say ,why not use two separate microscopes instead considering the similar cost factor ?
Any comments?

I had a partial setup with a Jetson Nano, which has two MIPI boards. For two microscopes with different optics.

why not using a single microscope with 2 cameras?

@Muralig1984
I am not sure what the compute module would have in terms of advantages.
Maybe what you mean would be having a double (objective + camera) microscope connected to a single compute board ? Which would then reduce the cost a little ?
I think it’s a good idea but what advantage would you see over having two completely different microscopes ? Having separated screen, keyboard etc ?
If so would connecting to the microscope from an external computer do the trick ?

My other question is : Is lower resolution really required ?
Can’t we look at high level images by artificially reconstructing lower zoom images from the high resolution ones ?

@dgrosen
I guess swapping the objective + camera would be too much of a hassle for sequential/simultaneous observations in routine.

What I meant was to use a single raspberry pi( compute module) having provision for two cameras. Thereby we can visualize a single slide sequentially with different objectives on two different 3d printed microscopes.
I think there are ways to simplify the process ( i.e. to use a single keyboard/mouse and the same display device for both the microscopes).Even the current “OF connect” can detect and connect to multiple connections ,perhaps one at a time.(I have not tested for multiple devices)

The other main reason was not to waste the raspberry pi just for one microscope, Just by adding a camera if u can run another microscope …that would be a bonus.

Lower resolution is required if ur looking for quick analysis of slides and for seeing a larger field of view.
Reconstruction of lower resolution images from higher ones is possible once WSI(whole slide imaging) is achieved and also at a good pace. However, the scanning time and the scanning dimensions are a limitation right now in OFM.

Yes swapping objective and camera every time is not preferable

What I meant was to use a single raspberry pi( compute module) having provision for two cameras. Thereby we can visualize a single slide sequentially with different objectives on two different 3d printed microscopes.

That goes in a similar direction as my proposal to build another version of the microscope holding multiple camera + objectives right ? You just have to set up and only 1 camera is active/used at a time, correct ?

I think there are ways to simplify the process ( i.e. to use a single keyboard/mouse and the same display device for both the microscopes).Even the current “OF connect” can detect and connect to multiple connections ,perhaps one at a time.(I have not tested for multiple devices)

Indeed I think multiple solutions exist, the most versatile (and not much more expensive) is to have 2 OFM so 2 Rpi and connect via OF connect to them individually.

I believe that it is also a question of process. It’s very impractical if you stick to the optical microscope process but could unlock advantages if the process is adapted.
If the microscope performs the WSI on its own, you know that you’ll have everything you may need in X hours and accessible from “anywhere” provided you have a good computer for handling the images and reconstruction.

Did you try WSI with an OFM ? What is your experience with that ?

I like the idea of having transmission and reflection imaging at the same time.

Even the current “OF connect” can detect and connect to multiple connections ,perhaps one at a time.(I have not tested for multiple devices)

You should be able to connect to two different microscopes simultaneously, either using OF Connect to discover them or using the Python client to automate your process.

I like the idea of having transmission and reflection imaging at the same time.

That should work physically using the upright microscope prototype with a full reflection optics module below the stage instead of the condenser. It again would have two cameras so would need two Pis, but this time only one set of x-y motors.

Another way to do this would be to use a module to switch between two cameras on a Pi.
They are not both on simultaneously, but you can switch between them, which is what you need here.

This is probably not the only version

Remember that OP was talking about using both camera channels with the CM4. This is an application where having both cameras available to software would be especially interesting.

Can OF connect detect USB cam attached to raspberry pi ?

Yes. Atleast a second Non-motorized microscope may be made functional with the same rasp pi .
In case the second microscope need to be motorized …will the second arduino unit be able to perform independently or is there a need to tweak the codes?

Currently the sangaboard is communicating with the Rpi using RX TX so it’s limited to 1 sangaboard.

We discussed with Valerian who designed the sangaboard about switching the communication to the I2C port which would enable 1 Pi to control multiple sangaboard and thus motorize multiple microscopes with little tweak to the code.

I love this topic. Very interesting. I was exploring this idea as well when I bought the “Arducam Multi Camera Adapter Doubleplexer Stereo Module” . I was able to activate 2 cameras and view them. However, I have no clue how to integrate it with the OpenFlexure software.
I think is totally doable to have 2 cameras connected with different magnifications connected to 1 RPi board. This is somewhat how the Grundium scanner works. https://grundium.com/scanners.
Of course it will require some major modification of the OF platform to accommodate 2 objectives. Also, it will be physically impossible to see the same field at the same time due to the size of the objectives. Probably this could be solved by programmatically by indicating the software to move the slide from the low power objective into the corresponding high power.

Yes ,even I had thought of having multiple- z axis in a single microscope and a lengthier slide holder (or even servo operated )which can move between objectives. I have ordered a similar camera module but it can accommodate 4 pi cam.Here is the link - 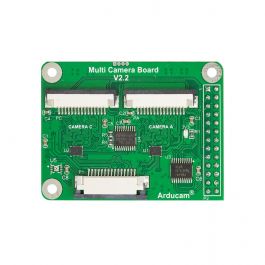 I feel like I should point out that a camera multiplexer is not the same as having two full CSI channels. The standard Raspberry Pi devices only have one CSI channel and so multiplexing two cameras is the only way to get them both working. But the Pi 4 CM has both channels broken out and can use them both at full speed, giving you twice as much bandwidth. It is not possible to get full framerate on two RPi cameras using the Arducam board.

I have been having a look around at compute module IO boards. There is a Waveshare one that breaks out the two camera ports in a base the same shape as a standard Pi, so pretty easy to integrate into the existing bases, except that the power is in the wrong end. It also has a header for an M.2 SSD for all of the pictures. That would be fun.